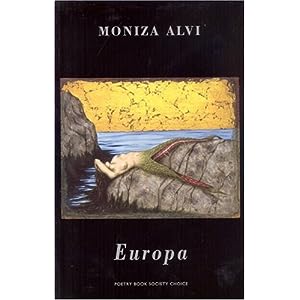 I’ve been wanting to share some Moniza Alvi, but the collection I have, Europa

Europa starts with an exploration of PTSD, then as Alvi reminds us that ‘trauma’ comes from the Greek (meaning pierced skin), it follows up with lots of wound imagery, before the title sequence – a retelling of the rape of Europa by Jupiter in the guise of a bull, then more musings on the idea of trauma as “a breaking of the bodily envelope,” and other types of trauma are included as well (war, theft, exile). There are translations from WWII-era Jules Supervielle, which often provide the only light relief in the book.

Nonetheless, despite the often grim subject matter, Alvi’s style is light and restrained, so nothing feels hammered home, dark for darkness’ sake. I wouldn’t have been desperate to share some of it otherwise. It’s a great collection, I think – worth reading as a whole rather than just dipping in and out of.

I borrowed a copy of her first collection, The Country at My Shoulder

, from the library in the hopes that it would help me by giving me something lighter to share, whilst also being able to discuss Europa

as a whole. The Country At My Shoulder refers to her Pakistani heritage (Alvi came to England as a baby), and contains a fantastic sequence about the “presents from Pakistan” – about the impressions made on her British life by the small tokens of the life she knows nothing concrete of in Pakistan (spices, a salwar kameez, a map of India).

While there is indeed plenty of less depressing or graphic imagery in here that I could share, I was inspired instead to share one poem from each collection – both retellings of fairy stories. First, Red Riding Hood (in The Country at my Shoulder), then The Little Mermaid (in Europa). I’ll point out here that the “after Tabitha Vevers” attribution on the latter relates to the painting on the cover of the book – Vevers’ When We Talk About Rape.

One iceberg December
the air mauve with cold
Red Ridinghood’s mother
struck out her own heart.
She salted it, she seasoned it.

Her daughter swears to her
I’ll never do that to mine
I’m going to visit Grandmother
for you haven’t seen her
since the day you were born.

Red sets out across the forest.
The moon blackens like an old banana.
The trees have nothing to give but shadows.

She peers through her grandmother’s window
net curtains half-way up.
The television blares and howls like a wolf.
Grandmother watches unseeingly
eyes swimming in absinth.

Red switches off the set
makes her grandmother and herself
cups of reviving tea.
She takes the cloth off her basket
and reassures the old lady

I’ve brought you my mother’s heart.

About human love,
she knew nothing.

I’ll show you he promised.
But first you need legs.

And he held up
a knife

with the sharpest of tips
to the ripeness of her emerald tail.

She danced an involuntary dance
captive
twitching with fear.

down the muscular length
exposing the bone in its red canal.

She played dead on the rock

dead by the blue lagoon
dead to the ends of her divided tail.

He fell on her, sunk himself deep
into the apex.

Then he fled
on his human legs.

Human love cried the sea,
the sea in her head.