The Cult of LEGO on minifigs, gender and diversity 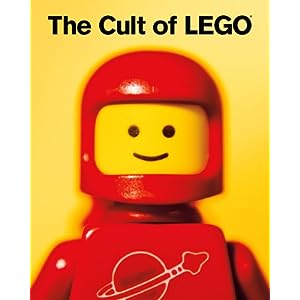 Baichtal & Meno’s lovely recent book The Cult Of Lego tells us “The first female minifig was a nurse. The ratio of male-to-female minifigs is 18:1.”

Eighteen! I wonder what proportion of those “male” figures had the original genderless face (as shown on the book cover, in fact) and have just been lumped together with the actual male figures. I’d like to think that this horrifying statistic can be blamed on this oversight of the minifig’s gender neutral beginnings, though of course another possibility is the spate of movie tie-ins. If there are minimal women in Star Wars, Batman or Pirates of the Caribbean, for example, the LEGO equivalent will look the same. Looking at early sets of minifigures, like this one from 1978, the figures could be anyone. They are so ambiguous, it’s nostalgically lovely.

Here’s some more about the gendering of the minifigures, again from The Cult of LEGO:

“As for gender, male and female minifigs do not exhibit secondary sexual characteristics, so men and women have the same body. Instead, the LEGO Group relies on hair, facial details, and printed body contours to differentiate the sexes. A female police officer looks just like a male cop, except for the lipstick and big eyelashes. In later minifigs, women had figures, but they were printed on the torso. For the most part, though, the default is asexual or male, depending on your point of view.”

To be honest I’d prefer these dudes to be classed as neither in the statistics. I did get a few questions (here and on Twitter) after posting my gender audit of our LEGO and Duplo sets about how I was categorising the characters, especially as some, for example the Ninjas, have pretty anonymising outfits. On the Ninjas, LEGO’s own biographies of the Ninjago characters confirms that only one, Nya, is female. She is wearing a very different outfit, much more figure hugging, and doesn’t wear the mask that the other guys do. Apparently though, “Women ninja are called kunoichi and historically, were trained differently because they had different tools of disguise at their disposal.“ Regardless, we do not have a Nya minifig so I am safe to call the Ninjas male.

I used similar logic when I looked at the collectible minifigs that LEGO have been flogging in foil packets in toystores and supermarkets.

I’ve still not completed my detailed cataloguing of various tertiary sexual characteristics of our minifig collection, as focusing on eyebrows and assessing curves was getting both painful and soul destroying, especially as I’d get so far through and suddenly feel the need to check something else or provide more detail on hairstyle.

Within the Education subset of LEGO products, there is a “Community Minifigure Set” whose gender balance is a more realistic 50:50, including as it does a female construction worker, fire fighter and police officer, for example. It claims it will “Bring your LEGO Town to life!” – as of course where there are no ladies there is no life, don’t you know. Plus, of course the defining feature of femininity is lipstick and mascara. Clearly if it weren’t for the lactation, I’d be putting myself in the male category anyway.

Sets such as this one almost appear as if LEGO is admitting there is a diversity issue in their existing ranges. A similar set is the Duplo World People set, redressing the race balance in the Duplo world (which I previously noted pretty much already had a quantitative gender equality)

I was tempted from the beginning to call this a diversity audit, but the single solitary black Duplo firefighter in our collection, and the heteronormative couplings in the World People set showed me that it would be taking things several steps too far. Plus I’d be guaranteed to class any Latina characters as white, as I’m woefully ignorant like that.

Baichtal and Meno also have something to say on racial diversity. It appears that originally the yellow skin tone was intended to be neutral, but when they replicated the NBA team in 2003 it was felt that the players’ actual real life skin tone should be replicated. After that it seems that it was acknowledged that yellow meant white – just as it appears that the original smile and two eye dots now must mean male.

Tweet
This entry was posted in Uncategorized and tagged gender, lego. Bookmark the permalink.

3 Responses to The Cult of LEGO on minifigs, gender and diversity